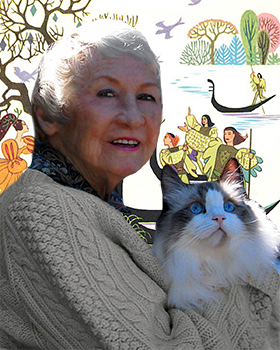 At 100 years  young she has just finished the new cover for the first reprint of, The  Twelve Dancing Princesses, since 1954. The book is due out on January 7, 2014.

Her first  break came at the end of the 1930's when she was given the job of  illustrating a series of books released in 1940 on the plays of Gilbert  and Sullivan.

In the 50's  besides illustrating books and magazine stories, her art can be seen in  advertisments for Whitman's Chocolates, Necco Wafer candy to name a  couple.

Sheilah's characters and style of painting are easily recognized and she has done this without an art lesson.

Sheilah, I  can't wait to see what paintings you share with us all in the years to  come. Congratulations on becoming a centenarian.