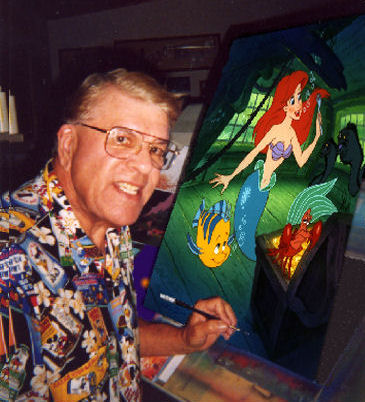 Ron began his animation career with  Disney Studios in 1956, where he worked as an inbetweener and clean-up  animator on "Sleeping Beauty". Ron's desire to become involved in  animation was sparked when, at the tender age of 6, he saw "Snow White  and the Seven Dwarfs". He was so taken by the film and its beautiful art that he decided, then and there, that he would someday become an  animation artist. After winning a national contest for his design of the U.S. Postage Stamp "CHILDREN'S FRIENDSHIP" in 1956, Ron headed  to Hollywood determined to work for Disney. After two portfolio  submissions, Disney Studios recognized Ron's exceptional talent, and he  was hired. Thus began an illustrious 40+ year career as a top animation  artist. In fact, Ron is appearing as the guest speaker on Disney  animation at the City of Kawaguchi's World Festival, on July 25th, in  Kawaguchi, Japan.

While Ron started his  career as an animator, he made his mark on this artform and has spent  the bulk of his career painting beautiful backgrounds for some of our  favorite animated features and TV shows. Over the years Ron has  contributed to so many feature and TV projects for so many studios that  we thought it best to highlight a "short-list" of his work through the  years.

For more information on Ron Dias and to look at some of his art please click on these links: