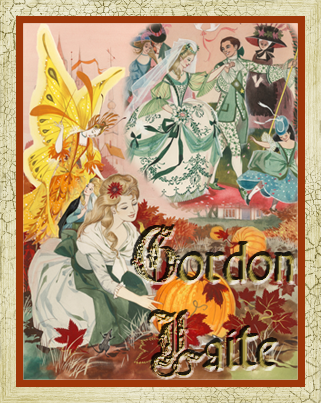 Gordon was born in New  York City on July 11, 1925 to Polish immigrants. Sometime during his  early childhood the Charles and Blanche Fisher Laite became his foster  parents.

Charles Laite was a  Broadway actor and appeared in four silent films. Charles died in  February 17, 1937 of a heart attack at the stage door of the Cleveland House Theater in Cleveland, Ohio, were he was an understudy for the play "In a Nutshell"..

Blanche was the  illustrator of one of the most popular children's book's ever sold, The Real Mother Goose by Rand McNally. Over 3,600,000 copies of this book  have been sold since its first printing in 1916.

He attended Beloit College in Wisconsin and the Chicago Art Institute.

Gordon married his wife Jeanne in 1948 and the couple had three children.

His later years were spent in Gallup, New Mexico until his death in 1978 at the age of 52.

* I've tried to find  information about this very talented man, but with no luck. If anyone  has any information they like to share it would be greatly appreciated.